How to be a Powerful Woman

Home/lifestyle/How to be a Powerful Woman
Previous Next

How to be a Powerful Woman 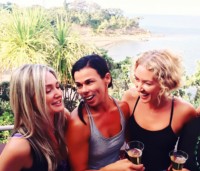 At 45kg I was emaciated. A tiredness hung over me that I’d never felt and my heart was broken. An industry that I had poured my heart and soul into for six years was splintered. My house was on the market and I had very real threats of losing a business that was my sole income. After a month of private and public attacks on me personally and professionally, I was up on criminal charges. I was haemorrhaging money to two law firms & a sole barrister who were fighting for me.

It ended in a police station. I was having a panic attack and vomiting in a scummy police toilet while being watched over by a policeman. My name and reputation was negatively being splashed over social media and in personal texts to my staff that same night. I had to make a statement at the station. What had bought me to my knees? What had brought a woman, who devoted her life to self development, integrity and respecting others to lash out so violently? The details of my rock bottom aren’t so relevant, but the recovery is. This story is what made me the woman, the yoga teacher and the business owner that I am today.

When I got home from the police station, I crawled into bed. My battle wasn’t over, I had lawsuits and a business to save, but the personal and professional abuse was. I’d made damn sure of that. I stayed in that bed and slept for 14 days leaving only to see lawyers.

My heart was broken. I had not only witnessed a palpable hatred by people I had loved and trusted, it had been launched into me in a seedy attempt to remove me from my position as majority owner of the Yoga Sanctuary.

I didn’t want the public’s desire to practice yoga to be tainted by the cancer that churned within my studio. Barely able to get out of bed, I could not manage the business. When I was at my worst and my reputation was in a shambles, two angels believed in me. Here’s our story.

Be a Woman of Integrity

Two weeks prior, a woman who I barely knew, but came to my class every Friday morning emailed me out of the blue. She said if I was ever looking for someone to manage my studio she’d love to apply. I handed her the keys to two cancer riddled yoga studios and with no prep or induction, I gave her a Yoga Sanctuary email address and a shambles to clean up while I fought the battle of my life. She was cc’d into vicious emails. Shocked, she showed me professionalism, impeccable work ethic, and a belief in me that today still blows my mind.

A month prior I had contacted yet another woman who came to that same Friday class and asked her if she’d like to trial for a yoga teacher position. She trialled and suitably impressed I gave her a job. After going to bed and finding I couldn’t get out again, she bought a cronut and a latte to my home and took not only all of my classes but the classes of the staff members that had walked out of my business without notice. She also became privy to the cancer and – shocked, stood by me even more when others fell away.

Physically I was exhausted. Publically I had been humiliated with misleading and untrue information and financially I was under huge strain. Inside however I was unbreakable. Daily I stayed true to one thing, I knew anyone fighting from their own weakness would eventually lose against the strength that I felt. I felt infinitely confident and I kept it private. I had an inner strength that no one could break and I kept that private too. I believed in what I had offered for many years and I kept that private. This was not a time to prove to others that I was a good and capable person, this was a time to slay. I knew that in time my world would see who I really was.

I allowed weakness and negativity to play out all around me. I allowed rumours and emails, gossip and social posts to play out. Disgusted, I ignored all of it.

As this happened, I noticed that people who vibrated on insecurity and weakness all gravitated towards the drama that unfolded. I also noticed that people who vibrated on an egoless love of life gravitated towards me. In the face of my downfall my life was naturally being reorganised. Weeds were being removed leaving me with a beautiful garden of souls who are all still my friends today.

I was not convicted of my ‘crime’ and I once more became 100% owner of the Yoga Sanctuary. People who work there today often comment on the lack of drama and the incredible friendships that we have at our place of work. I regularly get emails from people saying that I have teachers of a ‘world standard’. Anne-Marie and I hire them on a very personal criteria that no other studio owner could ever replicate. We’ve been through a lot together and it shows in a friendship that began when I was at my worst and only grew thicker and stronger over the years.

The memory of that time still brings me to tears. I witnessed hatred and egotistic madness that broke my heart. But I also witnessed love, support and beauty that to this day fills me with not only gratitude but pride to be in the presence of these people.

The Yoga Sanctuary recovered from her cancer. Every cell now is buoyant with health, truth, wisdom and bliss. Each cell is a yoga teacher, a manager, an administration genius (my mum). Look out though, we are powerful women. We slay negativity with our kindness, egoless confidence and everlasting love of yoga.